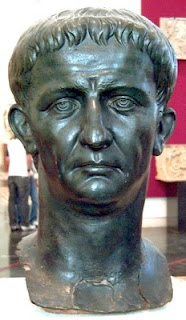 The Emperor Claudius's imperial designs on the British Isles turn out somewhat differently in Englandia.

Here's the first of three major changes to British history in Englandia:

The province of Britannia was incredibly important to the Roman empire. The Roman occupation changed Britain forever, but Rome never fully conquered the British, just enough to break the back of druidic power forever. Indeed, there is much reason to conclude that was the primary motivation behind the conquest of Britain was to stop the British from supporting the Celtic resistance on the continent, that destroying the British stronghold on Anglesey drove the shape of the conquest.

The problem is, breaking the druidic line in 60 CE destroyed some marvelous cultural complexity that I would rather have had to enrich my campaign in 1000. To recover it, I would have to find a tipping point in the Roman conquest that would have allowed the druids to survive until Emperor Honorius in 410 declined to defend Britannia (Rome was busy getting sacked by the Visigoths), effectively letting the province go its own way. Fortunately, finding what I needed was easy, inevitable, because all of Britannia already was a tipping point for the Roman empire.

The Romans never even tried to conquer Ireland, and they tried but failed to conquer Scotland, after wasting enormous expense and manpower: abandoning the Antonine Wall after 160 and losing 50,000 Roman soldiers to successful Scottish guerilla tactics during the rein of Septimus Severus.

The evidence is clear: the Romans wanted to complete the conquest, they needed to—failure to do so cost them dearly in military expenditures—but they couldn't simultaneously hang onto the rest of the empire and also finish the conquest of Britain. Rome was at its limit in Britain. Shifting that limit backward to prevent the destruction of Anglesey would not have taken much of a change.

The question for Englandia is whether the shift in the supernatural world—in supernature—would have been enough to bring that about.

On the con side of the argument, a real supernature along the lines planned for Englandia would have been great for Rome. A martial culture that revered Mars, God of War, would have found that a real Mars would have loved them, too, and his favors would have made Rome even more devastating in battle—and that's just one important god out of a vast pantheon who would have taken care of the Romans. For all the parts of life that fall between the domains of those great gods, imagine lares, penates, and genii filling up Rome with intelligence and concern, helping out in myriad little ways to keep every Roman on the path to success and out of trouble. Then, too, augurs and auspices, signs and portents, diviners and oracles, which the Romans so cherished and believed in, would have helped Rome immensely if they had been real, if they actually could foretell the consequences of their plans; imagine how many disasters they could have avoided.

Unfortunately for Rome, there is also a pro side of the argument. In a nutshell, Rome is outnumbered; Rome is one culture trying to conquer dozens of others, and every one of those cultures also benefits from Englandia's supernature. It's one supernature against dozens of others. The further a supernatural Rome expands the more supernatural enemies it makes, just like in real history and with the same consequences, more or less.

Not exactly like real history, though. Some things would change. The intensity of the struggles would increase and acquire their new, supernatural dimensions. This would shift the texture of conquest and resistance—some cultures that had resisted Rome well would do less well against a supernatural Rome, and conversely some that fared badly would stop Rome in its tracks because of this new dimension to their struggles. Based on design principle two from last post, the crucial variable would be which cultures had the poorest supernatural traditions and which the richest.

Which brings us to the British Isles.

The British mythology was as rich as the Roman. The land would be crawling with monsters of every variety. Every Celtic subculture in the British Isles had its greater gods and goddesses, and the lesser deities would be in every well, grove, and spring, in every venerated place in Britain—and almost every place in Britain was venerated.

As for magic use, this is one place the British would have an edge. Mediterranean conceptions of magic involved mostly nonmagical, heroic mortals interacting with supernatural forces and beings, but the British conception of magic was very different. The British supernatural extended into the lives of mortals. Sure, only a few would be mighty druids and witches, but even the many had their formidable gesas, talents, and second sights. Anyone familiar with Celtic mythology knows a gesa can make even a "normal" person profoundly mighty (at least until the downside kicks in and destroys his life, but hey, that's the Celts for you), but it's the second sight and related forms of divination that make all the difference.

Many Celtic magics resulted in the ability to foresee the future. Yes, many Roman ones did, too, but this is one ability where being evenly matched favors the otherwise-conquered. The problem for the Romans is simple: as important as their military might was to their imperial conquests, their political savvy was crucially important to their conquests.

Rome, like empires before and after, relied heavily on Divide and Conquer, a strategy that in turn relies upon finding feuding groups and lying to one of them that if they side with you then only their enemies will get conquered. In this way, a people who could have defeated you if united instead split up into small enough groups to beat. Rome used this strategy over and over and conspicuously used it to prevent the warring British tribes from uniting against them and kicking them out of the British Isles.

Divination, real divination, destroys this strategy utterly, because the parties being encouraged to feud with one another can check their divinations to discover that those feuds will result in their conquest, whereas uniting against Rome will result in their being able to kick the Romans out of their homeland. The Britons were mighty warriors and highly effective against the Romans (witness the Lost Legion, among many other examples).

If the Romans couldn't convince the Britons to break into small enough groups, the Romans wouldn't have made as much progress in their conquest of Britain.

So how far would the Romans have got under these conditions? They were still mighty and would have been mightier still, but so would the Britons have been, and their powers of divination would have let them unite against Rome. I'm opting for a conservative interpretation of the results. The Romans would still have pushed into Britain and held territory for an extended amount of time, but they could not have spread so far so permanently. They would have held the lowlands, but could never have permanently conquered any of the highlands or outlying areas.

For example, just as the Romans actually had to abandon the Antonine Wall and fall back to Hadrian's Wall, so under these supernatural conditions they would never have made it as far as building the Antonine Wall, and would have been unable to hold Hadrian's Wall either, falling back further into the Scottish lowlands where they would have built the walls and fortresses they could have held, closer to the center of their power in the southeast.

More importantly, they would not have made so much progress toward the centers of British magical power, where the most mighty magics would have been brought to bear against them. Thus, the more the Romans neared Anglesey (Ynys Mon), center of druidic power in Britain, the more they would have bogged down and failed. Just as the Romans in our world failed to hold Scotland and had to fall back to line of fortifications, so in this fantasy world they would have failed to conquer Wales and would have done likewise. Where Offa many centuries later would have built his dike to hold back Welsh raiders at the Severn River, the Romans will instead build Nero's Wall to hold back the terrifying ancient Welsh.