My Second Campaign Setting: Home Base 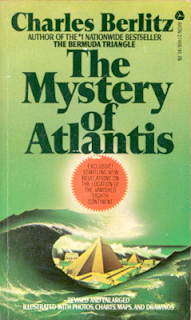 In the late 1970s I was a fan of the TV show In Search Of (yay Leonard Nimoy!), and on May 22, 1977 it ran the episode In Search of Atlantis, which blew me away at the time. I was so excited about the idea of Atlantis that with my allowance I bought off the rack in a grocery store a paperback by Charles Berlitz called The Mystery of Atlantis, which I devoured in a credulous frenzy. By eighth grade (1979-80), when the in thing for D&D players at South Shore to do was to make up a home base for our characters between adventures, there was no question where I was going to choose.

Sometimes the line between player and DM got a bit blurred in those early teen years, and illogical wish-fulfillment frequently drove our actions. In hindsight, it isn't clear what else could have. After all, since none of us had a developed campaign setting, our characters more or less didn't exist between dungeon adventures. Those of us dissatisfied with that state of affairs found the idea of creating home bases for our characters the more obvious next step rather than creating entire campaign settings for everyone else's characters. It seemed the most direct solution.

I don't know how everyone else at South Shore went about this, but in an effort to be fair I DMed my own player characters (PCs) as though they were someone else's characters through the process of discovering Atlantis, fighting dinosaurs on behalf of the ruling council (hey, what teenage nerd-boy doesn't dream of either owning or fighting dinosaurs?), and negotiating the purchase of land on which to build my characters' home base. The deal struck was this: my player characters defended the existing Atlantean kingdoms from the nasty monsters, and in return we got to take some vacant land to create the seventh kingdom. Armed with a magical Lyre of Building won in more normal D&D adventures, we worked week by week between dungeon crawls to construct that perfect home base at the bottom of the Atlantic Ocean.

This isn't quite as weird as it seems for that era, given the precedent of solo-gaming established in the back of the Dungeon Masters' Guide and given the absence of any better options for between-adventures existence, but certainly by today's standards when campaign settings are a dime a dozen it'd be completely unacceptable. I suspect some of my peers were building their home bases in even less acceptable ways, by inventing everything from whole cloth by fiat and giving it to themselves (we used to say "His DM is the #2 pencil!").

As it happens, though, the illegitimacy of our campaign settings' origins quickly became moot as those characters were gradually retired and we began to realize what else our home bases could be used for.
Posted by Rick Marshall at 11/30/2009 04:57:00 PM No comments: 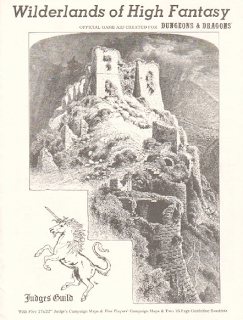 My first campaign setting was that amorphous "gaming land" most gamers begin with, a world of detailed dungeons and vaguely medieval towns in which to recuperate. It developed like this.

At first all our focus was on home-drawn dungeons, and we always started each adventure descending the staircase into the darkness.

Within the first six months of gaming, about the time we began rotating TSR's early dungeon modules into our mix, we also began starting adventures outside the dungeon, at first in the immediate wilderness environs, and later in the proverbial tavern.

Gradually, within the first year and a half, this expanded to include stores and other features of the villages containing the tavern, partly prompted by the nondungeon settings in The Keep on the Borderlands and The Village of Hommlet and by such marvelous Judges Guild settings as Tegel Manor, Wilderlands of High Fantasy, and City State of the Invincible Overlord (the release of World of Greyhawk was still a year and a half off at that point). The Wilderlands made a certain amount of wacky, wonderful sense, but unfortunately we only rarely used them as our settings (only when playing a Judges Guild module) because, honestly, we didn't fully understand what settings were for at this point.

No, the "settings" we made up made a whole lot less sense and tended to lack any permanence between dungeon adventures, except the proverbial tavern which was always much the same no matter which village we put it in.

It didn't take more than a couple years before all the gamers at South Shore were shifting their energies from dungeon design to continent building. Their original impulse was to create homebases for their characters between dungeons using the rather excessive treasure and power they'd stockpiled from their early and ill-conceived Monty Haul adventures, but it didn't take long before they began recycling and expanding their home-base designs into venues for running other people's characters through adventures. Sheeple that I was in middle school, I did the same, and so my second D&D campaign setting was born.
Posted by Rick Marshall at 11/29/2009 11:19:00 PM 1 comment: 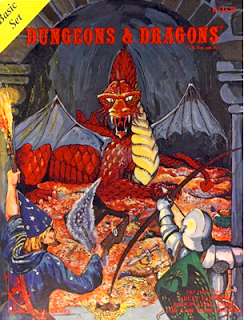 At South Shore Middle School in Seattle, when I entered sixth grade in the fall of 1977, I found a new craze sweeping the school. Students were drawing maps of imaginary places with pencil and paper and then pretending to explore those imaginary places. At the time I didn't realize they were playing a game with published rules. I just thought the maps and imaginary explorations were wonderful all by themselves.

I wanted to play, but at the time I was so uncool that even the uncool kids who played didn't want much to do with me, though they did tell me it was published under the name Dungeons & Dragons (D&D). My brother Rob and I were electrified to that level of frantic obsession that only children are capable of, so to regain some peace and quiet our stepmother, Jean, drove us down to Heritage Bookstore in Renton. We discovered that the white boxed-set of D&D being played by all the other kids was sold out, but a new colored boxed-set edited by J. Eric Holmes had just come out, so that's what Jean bought us (many blessings upon her).

Since that time, D&D's been a major part of our lives. D&D helped me learn many things and helped me socialize to the point that I eventually even became intermittently cool. I played all the time as a teenager and met most of my childhood friends through D&D, including my future wife. Wizards of the Coast was started by our Walla Walla gaming friends, and my wife was Wizards's second employee. She still works in the gaming industry and we still play (once a week when we're lucky).

I've been blogging since 2004 but not until now about gaming. I've started this blog in part to explore my D&D campaign world Englandia publicly, where other people can discuss it and debate it and take ideas from it for their own campaigns, and in part to discuss gaming theory - because I've arrived at a cross-roads. Although I've been playing for thirty-two years, in recent years I've found my creativity flagging and my joy in running games bogging down in rules and planning.

I've also arrived at a realization. Reading the D&D old-school-renaissance (OSR) blogs over the last year has helped me to understand that these problems aren't specific to me, much to my surprise, but are instead a not uncommon reaction to modern D&D rulesets. The more I study the OSR observations and theories, the more I think the decline in my capacities as a Dungeon Master (DM) is related in part to the very problems the OSR movement has been criticizing. Maybe not, but maybe, and if it is true, then maybe the OSR prescription for this ailment is also right.

Maybe by simplifying my gaming rules, by changing the focus from the characters to the players, by shifting from static scripting to dynamic scripting, and by making a homemade megadungeon environment one of the pillars of my campaign, this will dramatically ease the burden of DMing and return gaming to the creative recreation it used to be for me.